Band: MCR
Members: all the guys are included but there is a gerard bias in this post
NOTE: theres old and new mcr in here!
129 bases below

THIS POST IS DEDICATED TO MY GERARD WAY OBSESSED FRIEND thexbatxbuckle!!!!

'Cause the hardest part of this is leaving you.

Well good news for BCers and north west Americans, MCR will be playing the Virgin Festival in Vancouver this year on May 20!!!!! And I get to go *Does a little happy dance*. Totally can't wait.

something's come up and i can't go to this show now. so, here are the tickets:

( Sup ebay?Collapse )
so can anyone tell me when this was?
and if its real?

Hey guys, thought I'd share that "The Black Parade" won Best New Album in AOL Music & Blender's 2006 Noisemaker Awards. The award was voted by the fans--- Way to go guys!!! They totally deserve it! 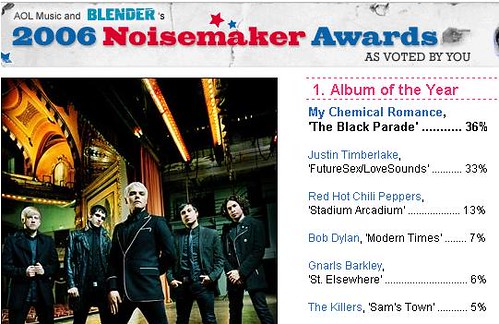 Hi. I just thought I'd let everyone know that if they're a fan of the show Friday Night Lights they should keep their eyes and ears open. You'll find that NBC is currently running promos for the show that plays the instrumental piano part of the beginning of "Welcome to the Black Parade" in the background. :)

My name is Sharon - and I live in Australia. I am one of the maintainers of the Aus MCRmy, a group we have established over LJ and had many successful missions. I am writing as I have heard we are mentioned in the letters sections (Sydney Black Parade)of this weeks kerrang magazine. In Australia we get kerrang 2 months behind, so if someone has this issue and can look to see if we are in the letters section, and then scan the letters section if so, I will be eternally greatful.

i dont know if this is allowed, but i was wondering if anyone here bought tickets to the dec. 1st show at the NorVa that they want to get rid of, I am willing to pay as much as you want me too.

has anyone played the game on the new mcr site?

I can't get passed the planes part.

anyone have any tips or spoiler as to what happpens after?

Hey guys. I've been listening to the album over and over again and I've read the book that came with the Lmt Ed.

But I was just wondering, what do you think the next music clip will be? I think it will be either Mama or House of Wolves. I was listening to House of Wolves a few minutes ago and the line 'Everybody burn the house right down' reminded me of when Gerard said that their new clip involved fire and it was so hot. So I think it's that, or Mama because of the recurring line 'Mama, we all go to hell' and hell is apparently very hot.